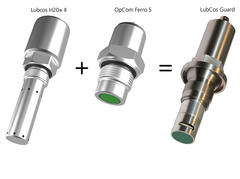 Maintenance of mobile and stationary machines is not always easy, as the components to be inspected are often difficult to reach. Often the whole plant has to be shut down to get to the components to be maintained.
This leads to production downtimes and thus to high costs. In order to keep these costs as low as possible, components that are difficult to access, such as gears and pumps, are only checked during major maintenance work. The disadvantage of this maintenance method is that any damage that occurs in the meantime is detected late, so that long downtimes and possible consequential damage to other components cannot be avoided.

ARGO-HYTOS has been successfully offering condition sensors for several years to prevent this type of failure.
In recent years, customers have had to use two different sensors from ARGO-HYTOS to monitor the above-mentioned pumps and transmissions: the LubCos H20+ II condition sensor and the OPCom FerroS wear sensor.

In the past, there was sufficient installation space for both of these sensors. However, both stationary and mobile hydraulic systems are becoming increasingly compact, which makes it difficult to install two sensors.
In order to be able to offer a sensor for monitoring the systems in a compact installation space in the future, ARGO-HYTOS developed and tested a new sensor last year. The new development is called LubCos Guard and is a combination of the LubCos H20+ II and the OPCom FerroS.

The combination of the two sensors makes it possible to monitor critical oil parameters such as oil humidity and temperature as well as wear in systems with only one sensor.

In addition to the features mentioned above, the LubCos Guard measures both permittivity (polarity of the oil) and conductivity. This allows oil mixtures and the degradation of additives to be detected. These two parameters are also used to calculate the remaining service life of the oil in order to extend oil change intervals and to plan downtimes in a targeted manner.