ARGO-HYTOS is growing in Poland 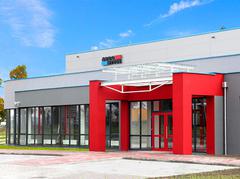 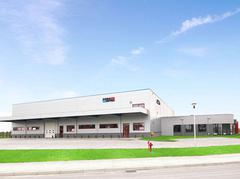 On 12th October 2013 the new company building of ARGO-HYTOS in Zator, Poland, was inaugurated in the presence of local politicians and an international internal delegation.
More than 300 visitors were present to celebrate the event.
After the ribbon was ceremonially cut, the visitors walked down the red carpet into a perfectly set scenery, accompanied by Polish Highland musicians. A Chopin concert and modern dance performances rounded the event, which was garnished with a buffet with typical Polish specialities.

The new building of ARGO-HYTOS in Zator, Poland, offers considerably more space for assembly and production than the previous plant in Wadowice did.
The production area is with approx. 1700 sqm now offering significantly more space, in order to serve customers in an even faster and more flexible way.
Until 2020, it is planned to increase the number 25 current employees up to 80.

Christian H. Kienzle, CEO of the ARGO-HYTOS group, explains his plans with this strategic expansion in Poland.

Mr. Kienzle, what were the reasons for erecting a new own building in Zator?

First of all, ARGO-HYTOS Poland only had little space available, in the office as well as in the assembly hall and we urgently needed to find a solution for the growing company. Furthermore we had space problems in our manufacturing plant in the Czech Republic and therefore we decided to produce hydraulic blocks in smaller quantities in Poland. This allows us to offer within a remarkably short time hydraulic blocks and systems as proto types or in smaller quantities in our subsidiaries in the north and east of Europe.

What further actions are planned in order to establish the location in Zator?

First we would like to strengthen our technical sales organization in Poland to increase our market shares with components and systems on the Polish market. Traditionally, ARGO-HYTOS Poland has a very good reputation in the field of hydraulic power units, which we will from now on produce for our customers in modern assembly halls.

Which further expansions within the ARGO-HYTOS have still been planned for the year 2013?

After the expansion in Poland, ARGO-HYTOS will inaugurate another office building and a workshop in the Netherlands. This will happen before the end of the year. In December this year our new manufacturing plant in Yangzhou/China will start its production. However, the inauguration will be celebrated in the course of the next year.
Moreover we have planned to set up a company in Russia and in Turkey.
In the year 2014 our subsidiary in France will erect a new building for expanded activities in the field of distribution and assembly of hydraulic systems.