Celebrate with us: 20 years of Particle Measurement Technology 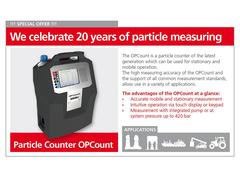 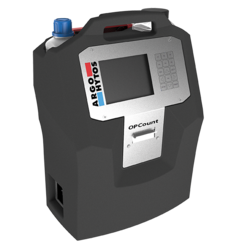 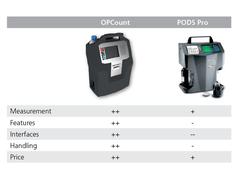 Since the sale of the first particle counter 20 years ago, the devices have continuously developed in terms of functionality and manageability. While only particle contamination could be measured with the first instruments, today‘s generation makes it possible to determine the water content of the oil sample. The user gets a quick overview of the oil condition.
The time required for input was minimized by integrating a touch screen. This has the advantage of efficient input and fast switching between the individual menu items.

As with the previous versions PODS and PODS Pro, the measuring method is an optical method which works according to the principle of light extinction. In this type of measurement, a laser irradiates a measuring cell through which oil flows and hits a photodiode. Depending on the size of the particle, a lower intensity is detected. In contrast to other methods on the market, particles from 2µm to 68µm can be measured and shown on the display. The measurement results can also be stored in the internal memory or printed directly via the integrated printer and attached to the respective sample.

In contrast to the predecessor models, compressed air is no longer necessary.
In addition, the current model implements continuous particle measurement. For this purpose the particle counter can be integrated directly into the high-pressure line. The device is pressure stable up to 420 bar.
The number of particles measured can be displayed in various cleanliness classes such as ISO 4406, NAS 1683 or GJB 420 A.
Particularly noteworthy is the possibility that the sensors of the LubCos series can be connected directly to the particle counter. It is not necessary to adjust the particle counter for this purpose. The measured values are shown on the display of the device and stored in the internal memory.
In order to be able to better compare the device generations, the most important properties are shown in the table on the left.