Cleaning an excavator with OPS 550 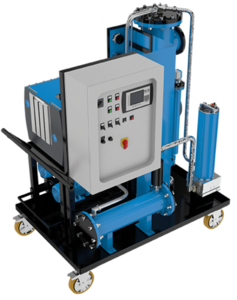 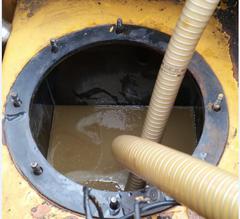 Installation of the device 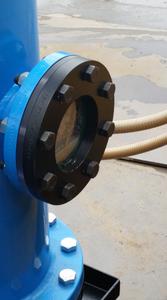 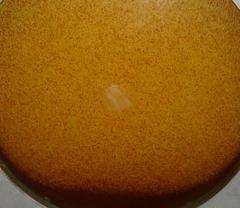 The existing contamination with water and air, which is visible as a foam.

Introduction
The standstill of a machine can be expensive. For this reason, operators are very interested in a maximum availability of their equipment. So that a machine will pay for itself, it is sometimes however operated at the limit or beyond. This in turn provokes wear and damage which may cause a standstill. Cleaning of the oil with the OPS is a fast and cost-efficient means to eliminate traces of contamination and wear.

Task
An excavator suffered from a defect at the tank cover due to his age and the conditions of use. Through torn bolts and a leaky closure, water could get into the oil tank. When the defect was noticed, large amounts of water have already been in the oil. By further operation of the machine, the water spread to the farthest pipe bends of the hydraulics and the machine shut down. Then a service company was commissioned with the oil change. However, this was not a solution to this problem, since large amounts of undissolved water remain in water nests as bends, hoses etc. Here the water collects and can only be removed or purged via circulation of the hydraulic circuit with a water-absorbing medium. Since the oil used had however reached its maximum water absorption capacity at an early stage, the water nests could not be removed completely, not even by rinsing.

After commissioning of the filled with fresh oil excavator, after only a short time the same situation presented itself as before the oil change.
The time spent on emptying, flushing and refilling the excavator added up to 2 man-days.
Looking at the total effort, it exceeds the costs of the fresh oil significantly:

For a more efficient solution, the ARGO-HYTOS service team was made use of. They utilized the OPS 550 (Oil Purification System), to clean off the oil professionally and to remove water, dirt and air in one and the same operation.

The oil content of the excavator amounts to approx. 300 – 400 liters in the complete system. The OPS was put into operation with the following settings:

These settings are only once made by the operator. Then the device operates completely automatically.

The installation of the device was as follows:
The tank could be reached only by means of a an auxiliary hydraulic lift due to the positioning and height of the excavator.
By direct connection of the OPS to the excavator, the hydraulics could continously be operated during the cleaning process. Since the oil is dried well below the saturation point, it is able to absorb water again. This allows to release the supports, jib etc. by movement from water, which is pumped into the tank and cleaned off by the OPS.
During this application, the hydraulic system was completely flushed and operated for three times. By removal of the water and the air, the response of the hydraulic was more direct and softer.
The whole deployment took 9 hours. Then the oil was clean again and the machine was able to pursue its actual work. As the process is fully automated and the OPS systems monitors itself, the mechanic could perform other work during the cleaning process.

Summary
The application example shows that the OPS systems are an easy-to-use and effective solution for cleaning and treating fluids. The OPS systems offer an alternative to the traditional oil change and help to save costs for expensive oil changes or downtime. The experts of our ARGO-HYTOS service team gladly support you in selecting the right equipment and calculating your cost savings.Technical Data